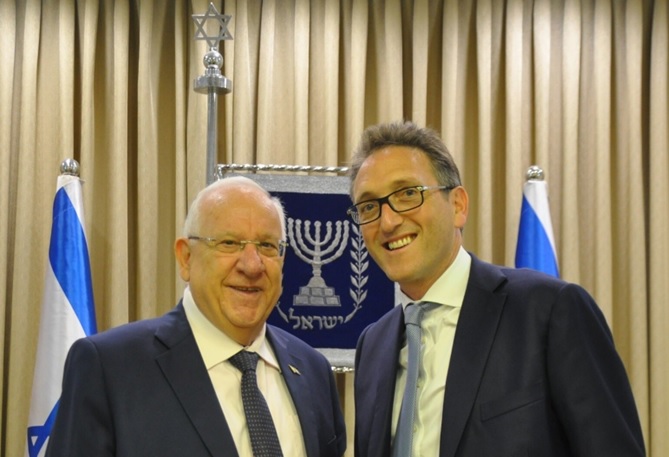 Even in times of great need, our community has come together and shined. We have not bowed our head to antisemitism. Indeed, we have stood taller. In the wake of Grenfell, our community mobilised immediately – doctors and social workers volunteered with victims, food and clothing drives were organised, funds were raised. We saw an opportunity to do good and we seized it. I am tremendously proud to be a British Jew.

Anglo Jewry’s success is the result of many things: robust institutions, a “can-do” innovative spirit, a commitment to the betterment of the society in which we live, an adherence to values that celebrate learning, engagement with government and an unbreakable bond with our ancestral homeland, the State of Israel. Today, I would like to reflect briefly on these two final items.

Earlier this month, the JLC led a delegation into Downing Street for the community’s annual meeting with the prime minister. For 60 minutes, we had the undivided attention of the head of government. We made requests and raised issues that require her attention while also sharing ideas and best practice from across our community on ways to make Britain better for all its citizens.

The feedback from the meeting was very positive. Delegation members were well prepared, making their representations concisely and constructively. The prime minister reiterated her support for our community and reiterated her willingness, and that of her government to work with us on the issues we raised. We are fortunate to live in a country in which the government hears our concerns and works with address them. Now that the meeting has come and gone, the hard work of following up begins but the JLC will work with its members to engage with government to move the agenda forward.

Any Diaspora community relies upon strong relationships with the government to thrive, but Jewish continuity and the success of Anglo Jewry relies on one more thing, which is no less important – a lasting and deepening bond with our ancestral homeland, the State of Israel.

One of the goals I set for the JLC in my manifesto was for the JLC – and through it our community as a whole – to be "louder and prouder" about our relationship with Israel.

This summer, my family and I spent our holiday in Israel. Every time I visit the country, I am amazed by the vibrancy, energy and optimism of everyone I meet. Of course, Israel has its challenges. But the overwhelming positivity that pervades the country never ceases to inspire.

Gaining an even deeper appreciation for and understanding of Israel’s political landscape was an important part of my trip. To that end, I met with politicians and officials from across the political spectrum, including President Reuven Rivlin, Minister of Strategic Affairs Gilad Erdan, Deputy Minister Michael Oren, Yesh Atid Party Chairman Yair Lapid and MK Tzipi Livni. I also met with Yonatan Schechter, Prime Minister Netanyahu’s foreign affairs adviser and Dan Shapiro, the former US Ambassador to Israel.

My counterparts were all very interested in hearing about the JLC’s work and our efforts to strengthen the ties between Israel and the UK. In the coming months, the Balfour centenary and the 70th anniversary of Israel’s birth present us with two unique opportunities to do just that. The Israeli parliamentarians I met shared their thoughts about the peace process, the political situation in Israel and the importance of bolstering relations between Israel and Diaspora Jewry. I came away from these meetings more confident than before about the desire of our Israeli friends to work with us going forward.

My first months as JLC Chair and my experiences in Number 10 and in Israel make me more energetic and optimistic than I was before. Yes, there are challenges, but a more collaborative, coordinated and considered JLC has the capacity to make a lasting and meaningful difference in the lives of every single British Jew.

In the coming months, we will work even more to do just that.

I wish you, your families and your loved ones Shana Tova and Gmar Chatima Tova!