Video Blog: Show Up for Shabbat

Life at PaJeS remains busy and even with schools on their summer break, our work continues on full steam ahead, ready for the start of the new school year. A few highlights from PaJeS over the past few months have been:

Israel70 - This hugely successful project masterminded by Nic Abery offered a unique and innovative opportunity for approximately 6,500 school aged children from 33 primary and secondary schools in the UK, Israel, Singapore and Seattle to explore, connect and reflect upon the cultural, artistic and historical narratives of Israel via 35 chosen artistic, cultural and historical objects from nine Israeli museums. This exciting international programme has been the flagship schools’ celebration for Israel70 and culminated in two international celebrations and exhibitions at JW3 in the UK and is currently at the Babylonian Jewry Heritage Center in Israel until November. The opening evening in Israel with the British Ambassador, David Quarrey, attending, was an excellent event.

Work with Ofsted - PaJeS met with Ofsted and will be working closely with them, Chinuch UK, the Board of Deputies and selected school leaders to discuss how schools can meet the DfE’s independent school standards. This will help to ensure that leaders will be able to support schools in their forthcoming inspections. In addition, we will continue to work with Ofsted and the DfE to spread best practice and provide schools with guidance on how Jewish schools can meet the standards on fundamental British values and protected characteristics while holding true to their religious values.

"I start with the premise that the function of leadership is to produce more leaders, not more followers." - Ralph Nader

Lead is all about developing leaders.  We are inspired by working with groups and individuals at all levels of leadership in both their professional and lay roles in our community.  As well as our successful long term programmes, did you know we work with individuals and organisations on a more bespoke level too?

Key to our consultancy offering is the bespoke way we can enable an organisation to focus on its challenges and equip its leaders to face them.  Our team has a wealth of experience across many areas of leadership development and is able to work with organisations to support and create programmes or standalone sessions that match the needs of teams and individuals.  We are passionate about enabling leaders to excel within their organisations and the wider community.

Labour must do more to show it is not antisemitic

It has been more than 100 days since our organisations, which lead the Jewish community, called for a protest in Parliament Square against the Labour Party’s lacklustre response to anti-Semitism. It is also almost three months since we met Labour leader Jeremy Corbyn to discuss a way forward. 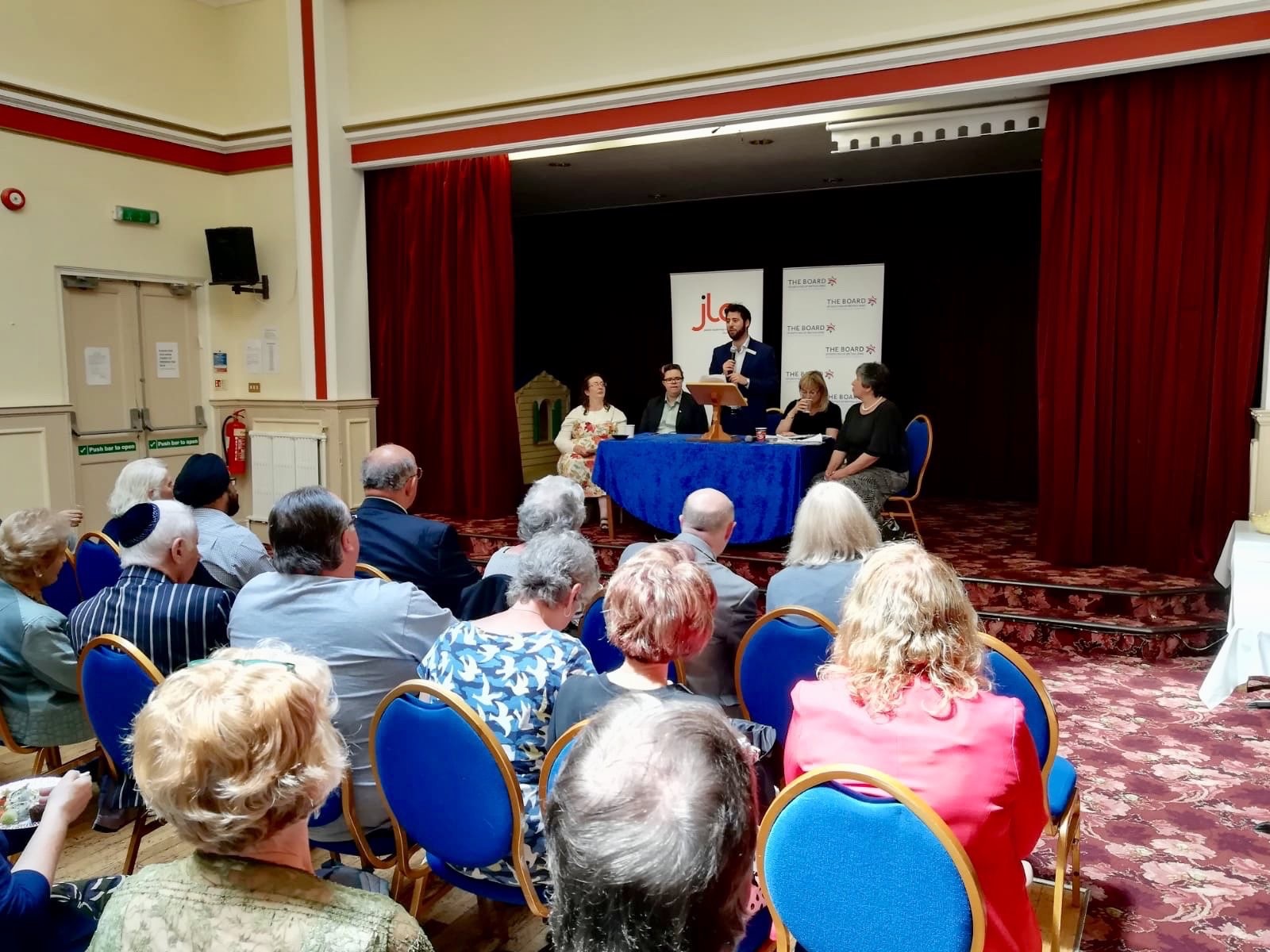 It was our pleasure to co-host with the Board of Deputies our fourth Councillor Seminar on Sunday 24th June. This time we were in Birmingham, welcoming councillors from all over the Midlands. We hold these seminars regionally in order to bring together councillors from across the political spectrum to discuss key Jewish community issues. The seminar consists of panels on antisemitism, social care, education and Israel. Last weekend, almost 50 councillors attended from 37 different boroughs to learn about the Jewish community.
The local community in Birmingham welcomed us into their synagogue hall where they spoke about some of the unique challenges of being a smaller community.
The JLC’s North East regional manager Miki Vyse chaired the education panel.

This year, there is a concerted effort to showcase Britain’s democratic ideals and remind everyone that it has been 100 years since some women were given the right to vote. The UK Parliament has devised a number of campaigns, events and publications available to the public which help us to really think about what it meant to be able to vote and what equality means to us today.

That’s why the JLC are partnering with Parliament on the EqualiTeas campaign, encouraging conversations about democracy and equality over a cup of tea.

The Jewish community in the UK have always had comparatively high levels of political participation. Our numbers exceed many other communities in voter turnout for elections. We are often, as a community, largely engaged with the political landscape and familiar with political developments.

This is exactly why we thought EqualiTeas would be the perfect campaign for us to take part in. We like tea, we like talking politics. So let’s get involved in this two-week national campaign to increase our conversations and awareness about equality, democracy and participation.

Sign up to receive your own EqualiTeas pack here:

It’s hard to believe I’ve only been working at the JLC for (just over) three months.

These first few months have been focused on getting to know Scotland’s diverse Jewish community, understanding more about the different communal organisations and the roles they play, and introducing myself to as many people as possible.

I’ve been working very closely with the Scottish Council of Jewish Communities (SCoJeC) and the Glasgow Jewish Representative Council (GJRC) and supporting the hard work that they do for the community.

The Scottish scene is a little different from the rest of the UK in terms of political engagement, and as such my time is split between engaging with the Scottish Parliament and the UK Parliament. I’ve met a few MPs and MSPs so far to discuss key issues and look forward to continuing to grow our network of contacts over the coming year.

At the beginning of last month, I had the privilege of joining the Holocaust Educational Trust’s Yorkshire and the Humber trip on their Lessons from Auschwitz Programme.
Since 1999 the programme has taken over 34,000 young people to Poland to see for themselves what racism and prejudice can result in, should it be acceptable in society.
The programme starts with a seminar a few weeks before the trip, and then followed up with planning how to spread and educate others on what the we have learnt.

It’s taken me almost a month to process what I saw, heard and felt that day.

My main objective has and always will be allowing our member organisations and communal bodies to benefit from the links established with the region’s MPs.  I am currently in regular contact with 87 MPs.  This includes the newest group of MPs elected following the 2017 General Election.  Over 30 MPs from both sides of the House hold Ministerial or Shadow Ministerial portfolios.

The overwhelming majority of these MPs have now been met on numerous occasions, enabling strong and trusted links to have been developed.  As an umbrella body, we are rightly extremely proud of the work our members undertake.  It is therefore imperative that MPs from across the country and political spectrum have the opportunity to meet with our members when their mutual interests overlap.

In the 1980s, Norman (now Lord) Tebbit articulated a combative test of nationality and loyalty for those Brits who had originated in the Sub Continent – Who would they support at cricket; England or their opponents?

This subtly racist, entirely derogatory statement has rather stuck in the national memory, being used to fling accusations of dual loyalty at any Brits whose family origins are from the Caribbean or the Sub Continent.

For the Jewish community, this was wearily familiar, as we have, over the centuries, become accustomed to the dual loyalty accusation as one of a number of cards played by antisemites.

But, this dual loyalty accusation became topical in the last month. It was used against two German International footballers of Turkish origin- Mesut Ozil of Arsenal and Ilkay Gundogan of Manchester City. They had been photographed presenting the Turkish President Erdogan, on his visit to London, with signed shirts. Gundogan’s bore the message “With great respect for my President”.

One week later, they had to both pose for photographs with President Steinmeier of Germany to dispel the claims of divided loyalties and the abuse that they had received since the original pictures. The players were forced to affirm their loyalty to Germany during their meeting. Gundogan was forced to grovel and say “Germany is today clearly my country and my team”.