Jewish Care Praised By Sadiq Khan, The Mayor of London 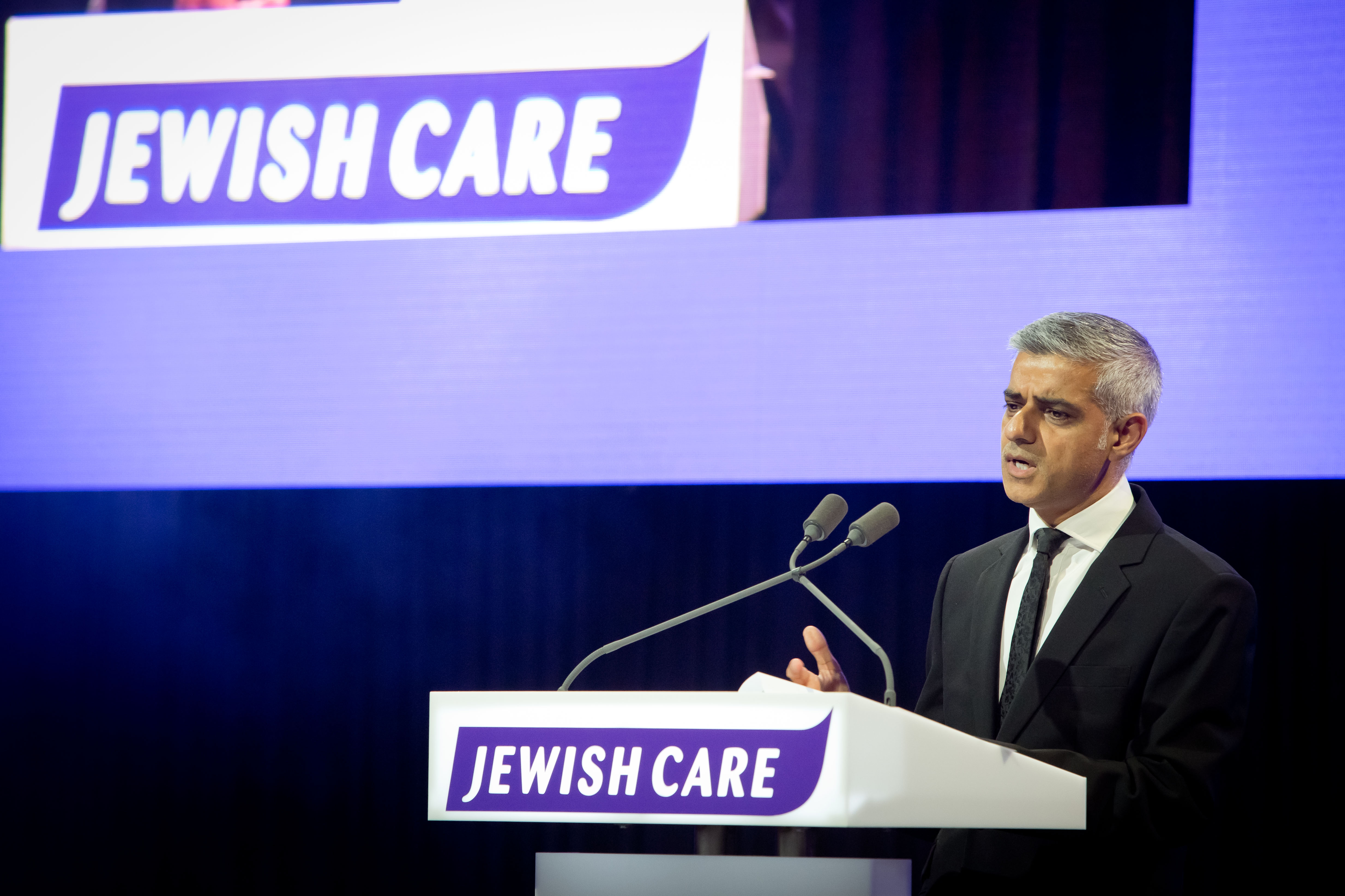 The Mayor of London, Sadiq Khan, addressed an audience of over 1,000 people at Jewish Care’s annual fundraising dinner, where he pledged to do all he can to create new opportunities for the Jewish community and continue in his fight to stamp out anti-Semitism in the capital.

The Mayor was welcomed into the room by Lord Levy, Jewish Care’s President who commented;

"We are honoured and delighted that you are here with us this evening. We are a small and very proud community and being part of the fabric of London and our country is very special and meaningful to us. And to know that our Mayor of London is a true friend to our community is very important to each and every one of us."

Before delivering his speech the Mayor spent time talking to the Jewish Care clients including David, Sid and Hyman whose stories appeared in a powerful film shown during the event.

95-year-old Hyman Pittal proudly showed off his war medals to The Mayor. They talked about his prized French Légion d’honneur medal, awarded by the French government to D-Day veterans, as a way of honouring and thanking those who risked their lives to secure France’s liberation during the Second World War.

Hyman, joined by his son David and daughter Hilary told The Mayor how Jewish Care have kept the family together after Hyman suffered a huge stroke which meant he could no longer provide the care and support his wife of 71 years, Rosalind required.  Rosalind moved into Jewish Care’s Lady Sarah Cohen House. Three weeks after Hyman joined her. Hyman commented;

“Jewish Care kept my wife and I together when we both needed each other and provide us with the care and support we need”.

During his speech, Sadiq Khan said:

“Jewish Care is an incredible charity and one that I’m proud to support. I’ve had the pleasure of visiting Jewish Care’s Wohl Campus in Golders Green and have seen first-hand the great work the charity does. What’s easy to see is that the values that are the basis of Jewish Care’s work are the values that are rooted in your religion.  As a community, you care for one another, you look out for each other – something that’s an inspiration to us all.”

The Mayor also spoke about the importance he places on supporting the Jewish community.

“I’m working hard to create new opportunities for your communities - as I do for all Londoners. Whether it’s more affordable housing, better transport, cleaner air or supporting business growth.  I’m also working hard to tackle issues that affect the Jewish community in particular and a key priority for me is tackling the rise in anti-Semitism. It’s simply not acceptable in London in 2017 - and I’m determined to stamp it out. As long as I’m Mayor, we will not rest until we win this battle.”

The evening was brought to a close by award winning artist Craig David who donated his time to perform at the event. The Southampton born star made a visit to a Jewish Care home the week before the dinner to see first-hand the impact the organisation has on the lives of individuals commenting;

"Visiting a Jewish Care home had a very special meaning for me as my manager of 17 years and close friend Colin Lester’s mother is a resident at Otto Schiff Care Home in Golders Green. The dedication and care I witnessed was incredible as helping to restore elderly and sometimes sick people’s dignity is a difficult task. This is an amazing environment.”

Speaking after the event Nicola Loftus, Chair of the Campaign Dinner and Jewish Care Trustee said;

“It was a special and incredibly moving evening. At a time when social care has been under the political spotlight we at Jewish Care are proud of what our community has created on behalf of the elderly and vulnerable in our community.

Jewish Care plays a significant role across the social care world and our staff represent over 70 nationalities who work together with over 3,000 volunteers to provide care and support for one faith. It is a model of what can be achieved by people coming together for a common purpose to help people live more meaningful lives and a reflection of Jewish values and of our community’s contribution to society.

None of what we do would be possible without the support of the community. Both the role our army of volunteers play and the generosity of our supporters”.

After the event Chairman Steven Lewis announced the event had raised over £5million commenting;

“Thanks to the generosity of our guests, last night we have raised over £5m, this is a great start towards meeting our revenue fundraising target of £15m for the year ahead.  I am also delighted to announce that we have made significant progress with securing commitments of £36 million for our next capital development project in Stanmore, leaving us with a £9m more to raise to meet the £45 million build cost”.