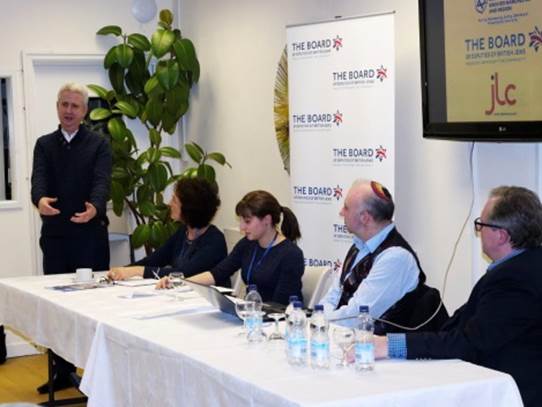 The Board of Deputies of British Jews, Jewish Leadership Council and Jewish Representative Council of Greater Manchester and Region joined together on Sunday to run ‘Jewish Manchester: A Seminar for Local Councillors’, at Heathlands Village, home of The Fed.

Jonny Wineberg, Chair of Executive of the Jewish Representative Council of Greater Manchester and Region, said:

“The event was a constructive forum for councillors to learn about issues in the Jewish community and an opportunity for the community’s local organisations and representatives to build relationships with councillors, which we hope will continue to blossom for many years to come.”

Gillian Merron, Chief Executive of the Board of Deputies of British Jews, said:

“This event was part of a series of events we are running for local councillors across the UK. Our aim is to ensure that as many councillors as possible understand the community’s interests and concerns, and support our causes in town halls up and down the country.”

“This important event built on the engagement we have been developing through meetings with North West council leaders and the Civic Reception we hosted for Chanukah. Together, our organisations are broadening and deepening engagement with Local Government, which can only stand the community in good stead.”