Come and see the JLC at Limmud this year 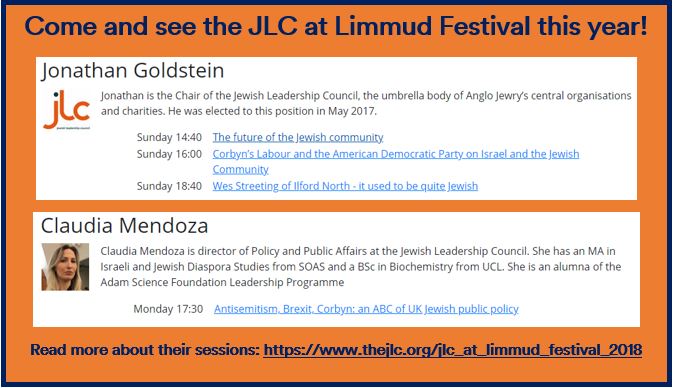 JLC Chair, Jonathan Goldstein, will be at the following sessions:

Sunday 16.00, Red 1: Corbyn’s Labour and the American Democratic Party on Israel and the Jewish Community

The British Labour party under Jeremy Corbyn has lost a lot of its Jewish support both around antisemitism and also as it has changed and continues to change its view of the Middle East - Israel/Palestine. Are there any similarities with trends in the Democrat Party in the USA? What are the influencing factors? Bibi? Trump? Internal? Campus? Ethnic?

Claudia Mendoza, Director of Policy and Public Affairs will be at the following sessions:

The key public policy professionals from the Board of Deputies of British Jews and the Jewish Leadership Council look back on the main challenges facing the Jewish community in 2018 and look ahead to what to expect in 2019. They will be seeking your input in to how the community should respond to the key issues of the day.