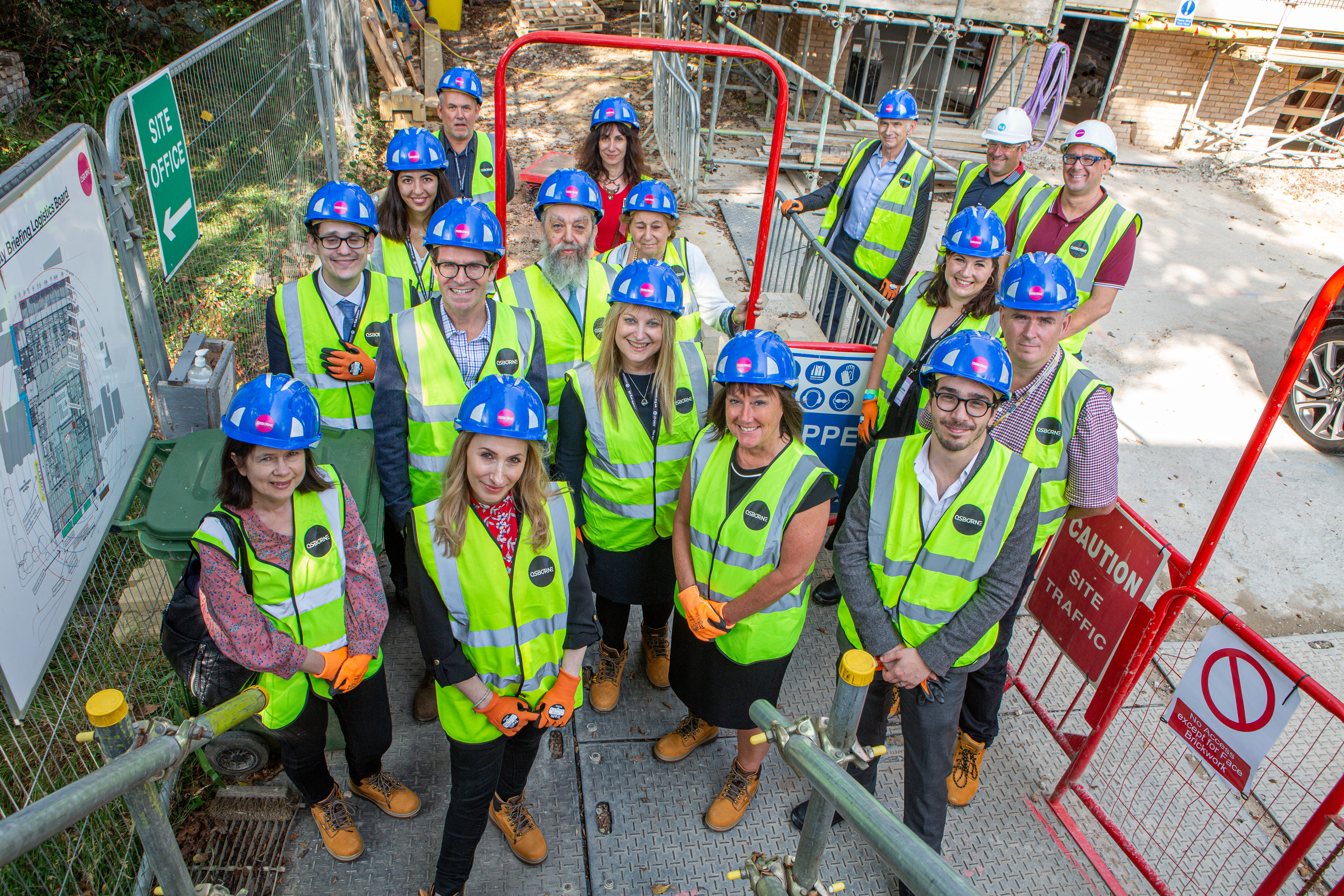 BNJC (Brighton and Hove Jewish Community) and Brighton & Hove Hebrew Congregation were delighted to host a contingent of guests attending the Labour Party Conference in Brighton for a tour to spotlight the importance and value of the city’s Jewish future, and its past. Guests included Jo Stevens MP, Shadow Secretary of State for Digital, Culture, Media and Sport, Claudia Mendoza Co-Chief Executive of Jewish Leadership Council and Marie van der Zyl, President of the Board of Deputies.

The contingent first visited the new Jewish community development in central Hove (BNJC), where CEO Marc Sugarman hosted a hard hat tour of the site. Still under construction and on track to open next summer, the community development aims to revitalise Jewish life in Brighton & Hove by building the infrastructure for Jewish life. Delicious Kosher dining, a beautiful new Synagogue and Mikvah, superb education, co-working facilities and a rich programme of cultural events provide every opportunity for the community to thrive.

Guests were also able to see first hand the outstanding accommodation being built on-site of this community hub. ‘Sapphire Hove’ includes 45 spacious homes ranging from Mews Houses to stylish apartments and penthouses, just 500m from the beachfront and under an hour’s journey to London. Interested buyers are encouraged to register interest early at sapphirehove.co.uk.

Jo Stevens commended the environmental credentials of the development, and the importance and value of sharing Jewish culture with the wider local community, saying:

‘It was a real pleasure to visit the Brighton and Hove Jewish Community centre and see for myself the ambitious vision for this project which will help to strengthen the Jewish community in Hove and establish a cultural destination for people across the whole of the city and beyond.’

Claudia Mendoza added “We were delighted to introduce the Shadow Secretary of State Jo Stevens to the Brighton Jewish community and visit such an exciting new development. Brighton and Hove was already a great place to be Jewish with a fantastic and vibrant community but the addition of BNJC will make the city even more attractive for many Jews wishing to live by the coast.”

Following the tour, the group moved on to visit Middle Street Synagogue, one of the most iconic synagogues in the UK. Guests heard from BHHC’s Rabbi Rader of the importance of the beautiful Grade II listed Synagogue as a vital heritage building both for Brighton & Hove and the Jewish world.

There was acknowledgement from all present of the need for investment to restore the building to its former magnificence.

Claudia commented “This shul is a hidden treasure in Brighton. Securing its future is important not only for Brighton’s Jewish community but for the nation. We hope that funding can be found to sustain this unique shul for future generations to experience.”

There was a consensus that the presence of BNJC’s new Jewish community hub in Hove, alongside the heritage value of Middle Street Synagogue could really make Brighton a wonderful and welcoming holiday destination for the national and international Jewish community in the future.

Rabbi Rader also asked that Jo pass on the local Jewish community's appreciation to Sir Keir Starmer for his leadership in combatting anti-Jewish racism within the Labour party.  Jo Stevens in response stated:

“It was important for me to take time out of the Labour Party conference to visit and I want to thank the Jewish community leaders who I met and spent time with. Repairing and re-establishing Labour’s relationship with the Jewish community was front and centre of Keir Starmer’s acceptance speech as Labour leader and I hope that my visit has helped that process.”