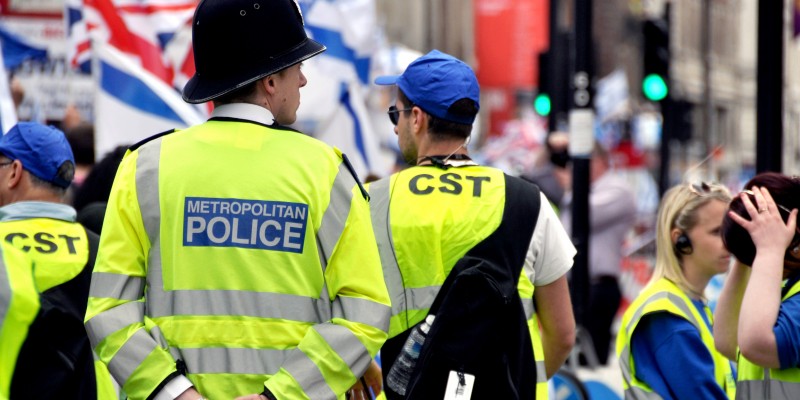 When it comes to security, the Jewish community has always been vigilant, aware of the fact that whether threats emanate from the far left, the far right or from Islamist extremists, we are often a primary target. Thankfully, the Community Security Trust (CST) does an outstanding job of providing not just physical but psychological security, by guarding communal buildings and institutions.

These four attacks help highlight various stripes of extremism, which we must be equally vocal in condemning. For example, CST has long warned of the dangers of far right extremism, whose primary victims have always been Jews, and has continued its work supporting Tell MAMA in its efforts to combat anti-Muslim hatred. Fortunately, the response to these attacks in both London and Manchester has been uplifting – rather than be cowed and divided, there has been a sense of defiance and unity against the seeds of dissension that the attackers have attempted to sow.

In such torrid circumstances, it is important to remain calm and vigilant while remembering our collective and individual responsibility to have zero tolerance for extremism. Because extremism is so depressingly common in every echelon of society, there is a very real threat we will become – and indeed are becoming - desensitised to it.

The revelation that the Manchester bomber Salman Abedi hung an ISIS flag from his house, or that the London Bridge attacker Khuram Butt was filmed in the documentary ‘Jihadis Next Door’ unfurling an ISIS flag, should come as no surprise. The transition from so-called ‘non-violent’ Islamist to Jihadist is a well-trodden path and highlights the importance of the government developing a counter extremism strategy which must develop at the same pace as the threat.

As part of this approach, we should raise the bar and demand that people are held accountable for their words and actions, especially in the context of the recent terror spate. In any circumstances, but particularly now, it is unacceptable that the recent Al Quds Day rally in central London convened by the Islamic Human Rights Commission saw the sickening spectacle of antisemitism and extremism on display as we expected it to be. Police stood by while Hezbollah flags fluttered aloft and the Grenfell Tower disaster was blamed on the “Zionists”.

The IHRC itself recognised that it might fall foul of UK laws about the glorification of terrorism. It advised its protestors to display support only for the ‘political wing’ of Hezbollah, which incidentally shares a flag with the ‘military wing’ of Hezbollah. This is an invented differentiation mocked by Hezbollah’s very own General Secretary, Hassan Nasrallah.  But it sufficed for the IHRC to be able to claim its protestors were not in contravention of Section 13 of the Terrorism Act (2000), which prohibits the display of any article of a proscribed organisation.

This ludicrous and false distinction between the wings of Hezbollah - a gift to Britain’s enemies – must be remedied if we are serious about eradicating extremism from our midst.

Another case of lack of enforcement has meant Britain finds itself in a situation where a group like ‘Friends of Al Aqsa’, whose leader has praised Hamas, has been gifted a UK government owned building, the Queen Elizabeth II Centre, to host a Palestine Expo – ‘the biggest social, cultural, and entertainment event on Palestine to ever take place in Europe’.

The government’s Counter Extremism Strategy is quite clear that there should be no engagement with extremists. Paragraph 96 of this policy is quite explicit – “We must be careful to only give a platform to the right people. We will be absolutely clear about the people and groups we will not deal with because we find their views and behaviour to be so inconsistent with our own. We will not provide funding or support which inadvertently gives extremists a platform or sense of legitimacy”.

Paragraph 97 goes on to detail that the government “will ensure that the public sector consistently avoids giving extreme groups the air of legitimacy by meeting or working with them”.

The path of least resistance usually leads to inertia over such matters, but it is important that we now redouble efforts to ensure the government’s No Platform policy is enforced across the board so that we do not descend still further into a cycle of non-compliance.