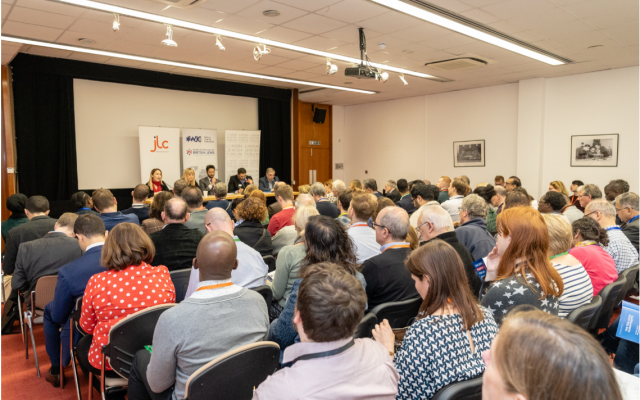 More than 120 councillors from almost every London borough attended a councillor seminar organised by the Board of Deputies, Jewish Leadership Council and London Jewish Forum.

This was the biggest attendance for any such event, with a significant number of council leaders and cabinet members in attendance. Many of the Labour councillors said that they had felt it particularly important to attend in solidarity with the Jewish community, in light of tensions between the Party and British Jews.

The seminar covered a wide range of issues including antisemitism, Israel, education, social care, the Charedi community and social action, with sector leaders from different parts of the Jewish community talking through the areas of expertise.

Marie van der Zyl, President of the Board of Deputies of British Jews, said “We have run these events around the country for councillors from all parties. They are critical to winning the arguments on issues like antisemitism. We were delighted by the response yesterday and look forward to working with councillors across London and the UK going forward.”

Claudia Mendoza, the Jewish Leadership Council’s Director of Policy and Public Affairs, said: “For many of our members, engagement and funding from local authorities is a necessity. It is vital that councillors hear directly from us the issues we face, particularly where there are cultural sensitivities. Having every London Council represented made the event a tremendous success”.

Adrian Cohen, the chair of the London Jewish Forum said: “It was encouraging to see so many councillors from all over London at the seminar yesterday, engaging with a range of issues that affect Jewish Londoners. We are a diverse community and we were pleased to be able to provide insight and understanding to councillors on social care, housing, security and social cohesion and the value we place on social action and education.”

You can read more about the event here:

A delegation of Jewish community leaders today met with Prime Minister Theresa May to discuss the challenges we face and highlight the community’s contribution to British society including social care, education and security.

The Jewish Leadership Council (JLC), which facilitates the annual meeting with the Prime Minister, worked with its member organisations to put together an appropriate agenda, including topics of national and international significance.

Under JLC Chair Jonathan Goldstein’s leadership there has been a concerted effort to increase the number of women in leadership positions within the Jewish community and this was reflected in the delegation that met with the Prime Minister this year.

The meeting with the Prime Minister allowed the delegation to raise potential issues and share ideas.

During the meeting, among other things the JLC discussed their submission to the Integrated Communities green paper and the Jewish community’s plans to address issues around children and young people’s mental health, particularly in schools. We thanked her for her support for the Holocaust Memorial and the grant to UJS from MHCLG and the Department for Education which, joint with the Holocaust Educational Trust, will take 150 sabbatical officers and vice chancellors to Auschwitz.

“I was pleased to meet with the Jewish Leadership Council to discuss the challenges their communities face, particularly as we react to the shocking attack in Pittsburgh.

“Today’s meeting was an opportunity to pay tribute to the tremendous contribution British Jews make to this country, to praise the community for its resilience and optimism, and to reaffirm my commitment to stamping out antisemitism in this country.”

“It is vital that we continue to have such constructive meetings with the Prime Minister to discuss issues that are important to the British Jewish community. We are grateful for Theresa May’s support in the face of antisemitism and appreciate her continued assurance that tackling hate crime will remain a priority.

“There are many members of the Jewish Leadership Council who work closely with the government on a number of issues and successfully create partnerships and support on ongoing issues. We look forward to continuing our relationship with the Prime Minister and government departments to strengthen our work and the work of our members.”

Show up for Shabbat

We join American organisations in calling on Jewish communities across the country and around the world, along with leaders, politicians and other allies, to attend a synagogue this coming Shabbat (Friday night and Saturday, 2nd -3rdNovember).

Chanukah In The Square Is Back for 2018 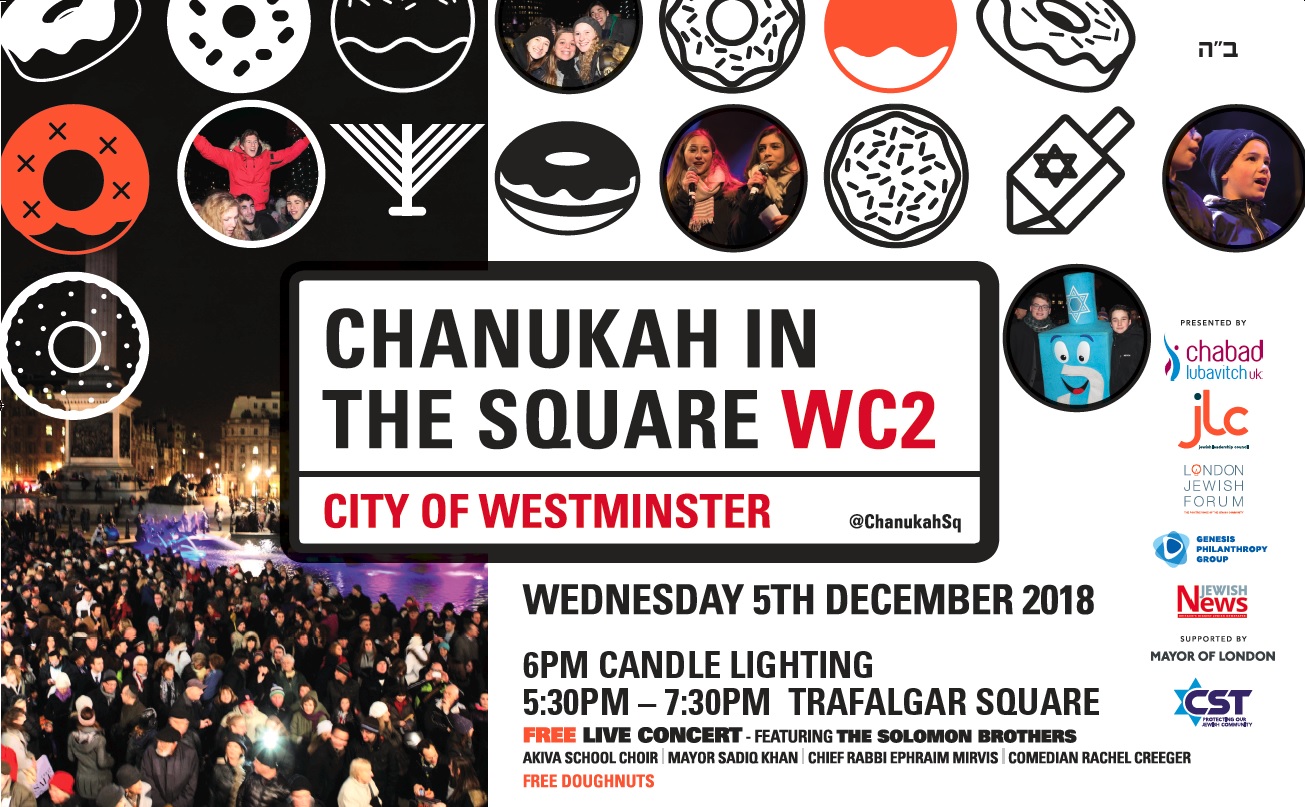 Get ready for a jam packed evening with live music, dancing and festivities as we celebrate the festival of light on Wednesday 5th December 2018 in the heart of London, Trafalgar Square from 5.30-7.30pm.

Hosted by award winning comedian Rachel Creeger, enjoy live music from The Solomon Brothers, the Marc Levene band, Akiva School Choir and hear from Chief Rabbi Ephraim Mirvis and Mayor of London Sadiq Khan. There will be thousands of free doughnuts given out on the square and you will even get to see the famous Dreidelman live in action!! This event is brought to you by The Jewish Leadership Council, Chabad, the Genesis Philanthropy Group and the London Jewish Forum and is supported by The CST and Mayor of London. The Jewish News is the media sponsor.

The evening will be a perfect opportunity for the community to come out in numbers and #uniteunderthelight.

Remind yourself about how good Chanukah in the Square was in 2017 here.

Stay up to date with the latest news on our Facebook page and enter our competition to win a brand new Fitbit Alta.

We cant wait to see you and celebrate Chanukah in style with you.

The massacre at the Tree of Life Synagogue in Pittsburgh has shaken our community, and Jews around the world, to our very core. My heart goes out to those who have lost loved ones and I wish Refu’a shlema to those who were wounded.
Evil has struck at the heart of our Jewish life; death has desecrated our house of worship. Yet we remain defiant in the face of hatred and violence. We recommit ourselves to peace and civility and vow not to succumb to this darkness.

This week, I encourage all British Jews to stand together with our brothers and sisters around the world by taking part in the #ShowUpForShabbat initiative.
This Shabbat, in synagogues across the world, across all denominations, in greater numbers than usual, we will show solidarity with the victims of the shooting and stand united against antisemitism.
Please do show your support for this international campaign and show up for Shabbat this week.

If you would like to send a message of support ahead of Shabbat to the Pittsburgh Jewish community, please visit the JLC page here https://www.thejlc.org/pittsburgh

Watch JLC CEO Simon Johnson visit Jami's Head Room Cafe in Golders Green, where he discusses the challenges facing young people and mental health, and why mental health is important to our community.

The Jewish Leadership Council is pleased to announce that Mitzvah Day is the latest organisation to be joining the JLC.

Mitzvah Day is guided by the Jewish values of tikkun olam, gemilut chasadim and tzedek, bringing Jews and non-Jews together to build more cohesive neighbourhoods and to strengthen civil society.

This year, Mitzvah Day celebrates its tenth anniversary as a charity and involves around 40,000 people giving their time to make a difference to the community around us. Mitzvah Day is one of the Jewish community’s greatest social action organisations encouraging interfaith interaction, volunteering and engagement in civil society. It is the country’s largest interfaith social action event.

The JLC now has a total of 35 member organisations. We work through our members, regional representative councils and across all denominations of Judaism to ensure the interests of the Jewish community are promoted.

“The JLC is delighted to have such a wonderful communal organisation join our membership. We look forward to supporting Mitzvah Day and seeing this relationship go from strength to strength.”

“Mitzvah Day is very pleased to be joining the JLC. Mitzvah Day focusses on building bridges both within the Jewish community but mostly with other faith groups, opinion leaders, and the wider world. Membership will enable us to contribute more effectively to the discussions on the challenges facing both our own community and society at large."

WATCH: Jonathan Goldstein speaking to the No to Antisemitism Rally in Manchester

Following the decision by Enfield North and Luton South Constituency Labour Parties last night to censure their Members of Parliament for speaking out against antisemitism within the Labour Party, JLC Chief Executive Simon Johnson said:

“When the Jewish community speak of institutional antisemitism against Jews in the Labour Party, little can illustrate the example better than Party members gathering and hijacking a local constituency meeting to censure their Member of Parliament for speaking out against antisemitism.

Joan Ryan MP has been unwavering in her support for the Jewish community for decades and we greatly appreciate everything that she has done for our community whilst serving as an MP. The decision to censure her is a disgrace and should bring shame to the Labour Party leadership.

Gavin Shuker MP also bravely spoke out on BBC Newsnight this week in favour of the Labour Party adopting the IHRA definition of antisemitism in full. No Member of Parliament should face sanctions for taking such a principled stand. When we met with Jeremy Corbyn, we asked him clearly to use his voice to put an end to intimidation like this. His silence is deafening.”