The community's policy priorities are summarised in the "#TenCommitments" that the Jewish Community is asking candidates to support.  These include implementation of the Internationally recognised definition of antisemitism, ensuring faith and culturally sensitive provision of public services, and supporting anti-racist education.

The manifesto can be viewed here.

A spokesperson for the organisations said:

"The last year has been incredibly hard for everyone. As Scotland recovers and rebuilds from the pandemic, this Jewish Manifesto for Scotland provides future MSPs with a guide to how to support the Scottish Jewish community. We look forward to engaging and working with the new Scottish Parliament and Government on implementing our manifesto proposals, and we urge all candidates and elected representatives to endorse the principles summarised in the #tencommitments to help ensure that Scotland continues to be a great place to be Jewish. "

The Jewish community has launched a manifesto for the London Mayoral and Assembly elections. The Jewish Manifesto for London, drafted by the London Jewish Forum, the Board of Deputies of British Jews and the Jewish Leadership Council, addresses the issues that concern Jewish Londoners. The community’s policy priorities are summarised in the manifesto’s #TenCommitments that candidates are being asked to support, that include implementation of the International Holocaust Remembrance Alliance’s working definition of antisemitism, ensuring faith and culturally sensitive provision of public services and opposition to boycotts of Israel.

Adrian Cohen and Andrew Gilbert, Co-Chairs of the London Jewish Forum said: “We are delighted to be launching the Jewish Manifesto for London 2021. The last year has been incredibly tough for Londoners, including our Jewish community. This manifesto will give our elected officials a guide to addressing the needs of London’s Jewish community as we come out of this pandemic. We very much look forward to working with the next Mayor, their team and the London Assembly to support the Jewish community.”

Marie van der Zyl, President of the Board of Deputies said: “As our society recovers from the pandemic, this manifesto provides a road map to elected representatives on how they can serve their Jewish constituents. Following its recommendations will help ensure that the Jewish community is supported and valued.”

Jonathan Goldstein, Chair of the Jewish Leadership Council said: “Following consultation with our member organisations we are pleased to present the Jewish Manifesto for London, outlining the priorities of Jewish Londoners. As we recover from the pandemic, a strong relationship between London’s politicians and the Jewish community couldn’t be more important. We look forward to working with our communal partners on the implementation of this manifesto.”

The London Jewish Forum, Board of Deputies and Jewish Leadership Council will be hosting Jewish community hustings for the Mayoral Election on 19th April. Alongside this, there will also be hustings in other London Assembly constituencies. More details can be found at www.londonjewishforum.org.uk 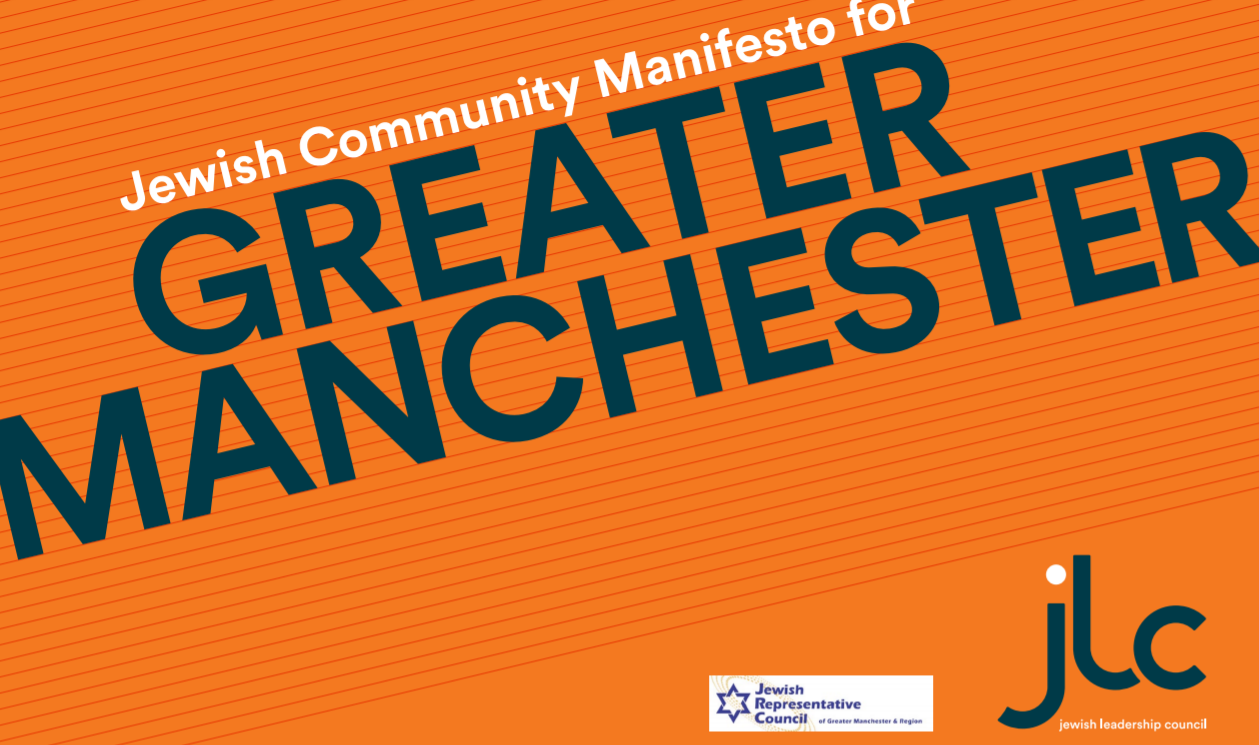 Foreign Secretary Dominic Raab today met representatives from the Board of Deputies and the Jewish Leadership Council to discuss subjects including the Uyghur crisis in China, the upcoming Human Rights Council and Government support for an international fund for Middle East peace.

Board of Deputies President Marie van der Zyl and Jewish Leadership Council Chair Jonathan Goldstein said: “We would like to thank the Foreign Secretary for meeting with us and discussing these important matters for our community.”

The Jewish Leadership Council (JLC) today announces that its interim Co CEOs, Claudia Mendoza and Michelle Janes, have accepted their roles on a permanent basis.

The pair were appointed on an interim basis in June 2020 following the departure of former JLC CEO Simon Johnson, whilst continuing their existing positions of Director of Policy and Public Affairs and Executive Director of Lead. Following a thorough internal process, JLC  trustees agreed that Claudia and Michelle had both impressed and excelled in their roles and were the right candidates for the challenges ahead.

This is the first time that a major Jewish communal organisation in the UK has appointed Co CEOs. This model of leadership has been welcomed by the JLC membership and praised by community leaders for demonstrating flexible, diverse, and innovative approaches to communal leadership.

The Premier League has adopted the International Holocaust Remembrance Alliance's (IHRA) working definition of antisemitism, as part of its ongoing commitment to promote equality and diversity, and to combat discrimination of any form in football.

The Premier League is the latest organisation to recognise the working definition, which has been formally adopted by the governments of the United Kingdom, Germany, Italy, Hungary, the United States, the European Parliament and more than 30 other countries.

The Jewish Leadership Council has recently approved and filed its 2019 accounts.

Responding to the unprecedented events during the Covid-19 pandemic the JLC has:

Highlights from 2019 shared in our accounts include:

The JLC ended 2019 with a small deficit which was predominantly due to significant, unbudgeted and unforeseen additional unrestricted expenditure, as the final stages of the Independent Review in to Historical Allegations for the Charity Commission were reached. These included substantial legal and professional fees and an associated Governance Review.

After consultation with local Jewish groups and the Jewish Leadership Council (JLC), the West Midlands Combined Authority (WMCA) adopted the full International Holocaust Remembrance Alliance (IHRA) definition of antisemitism at its Board Meeting on 24th July.

Reshet - Busy b’Bayit during Covid-19 and Bouncing Back

During the Covid-19 pandemic, Reshet, a partnership between UJIA and the JLC supporting the Jewish informal education and youth sector, has increased its hands-on and strategic support for the community. The organisation has responded to the changing ways in which our community is providing provision to young people.

Reshet has led and facilitated training sessions on a wide range of pertinent issues including wellbeing, grief and change during the pandemic and decision making at a time of Covid-19, as well as running a number of online educational forums for those in the sector.

The way in which we engage with young people has dramatically changed since the Government announced the nationwide lockdown and since its relaxation. Much engagement initially moved online and therefore the emphasis on how we keep our young people safe has also had to change. In response, Reshet has produced updated guidance for safeguarding young people in Jewish communal settings.

The organisation has also pooled the virtual activities and events that our communal youth organisations have been providing during the crisis through its Busy b’Bayit portal on the Reshet website.

In addition to this work, Reshet has been supporting the sector in preparations for a very different kind of Summer Jewish experience, with all overnight camps and tours cancelled, and day camps and online activities being the only possible mode of informal education delivery.

Plans are already in place to continue to provide the flagship, CPD accredited Professional Development Programme for Jewish professionals working directly or indirectly with Jewish young people 2020/21 and applications for this are open until 4th September. https://reshetnet.com/eventscalendar/reshet-professional-development-programme/

Reshet will be holding its Annual Gathering on 7th September.  At every Annual Gathering, we explore different educational themes as well as having a meaningful opportunity to network with colleagues old and new, enjoying an evening together which is both valuable and supportive.

In 2020, our theme is ‘Bouncing Back’, hosted online and participants will receive a ‘Bounce Back Pack’ in advance of the event. https://reshetnet.com/eventscalendar/reshet-annual-gathering-2020/

“The way we engage our young people has dramatically changed as a result of Covid-19. The Jewish community has been nimble in its work and I am proud of the work Reshet has delivered, guiding and supporting the sector during this challenging time.  It is essential that as we learn from and with each other, continuing to support informal Jewish educators in bringing the best of themselves to the young people they serve.

Through the Emergency Community Fund and Social Care Assistance Fund, the JLC have raised over £2m for 235 families facing financial hardship and 28 organisations protecting and providing for over 15,000 vulnerable people.

We also provided modest support and broader backing to the Jewish Homes Emergency Appeal, which raised almost £4m for fourteen charities running 20+ residential care homes for older people across the UK. 15 charities’ direct appeals raised over £2.3m during the last three months. Many more charities have benefitted from generous giving during these difficult and distressing times.

At least £8.3m and probably over £10m has been raised from our community during the pandemic. Jewish charities have also been grateful recipients of support from the National Lottery, London Funders, Manchester Together and other national and local crisis funding providers.

The coming together of 10 foundations, 36 philanthropists, and dozens of community members to fund our two emergency projects was unprecedent in scale and speed. The sense of collective responsibility and collaborative leadership has been demonstrated beyond the heart-warming way so many have provided additional and urgent support.

Charities have paused fundraising appeals to allow frontline care providers to be the focus for our community’s tzedakah. Regular sharing of information and resources has been a feature of a cooperative spirit, including charities donating PPE to other organisations or transferring staff to expand meal provision to those ill or isolating.